Strategies of contemporary culture in the concept of simulacres by J. Bordriyar

The article analyzes the concept of simulators of J. Baudrillard in the context of the formation of a methodological toolkit for the research of contemporary culture. It is determined that attempts to consider the work of Baudrillard by certain stereotypes hide the fact that this philosopher, when creating models of the field of research, did not address the emerged methodological structures. The actual formation of a conceptual apparatus describing author’s models of the field of research turns methodological tools into signs that determine the field of Baudrillard’s research. One of the main conclusions that can be  made by exploring the Baudrillard concept is the provision of modern consumption as a consumption of signs and symbols that has lost touch with the pleasure of biologically based human needs. This process is called the desire of buyers to be identified. Baudrillard seeks to show that the signs themselves produce their referents and meanings. Moreover, the signs try to break with all meanings and references and to be closed only on interaction with each other. As a result, a real universe of signs appears and this sign-object machine seeks to absorb the «real» world. This is probably because language has always been a means of social control, and since in the era of globalization such exploitation of language has only intensified, now the signs are completely detached from their referents and the «era of simulation and simulacra» arises. The fundamental is discussing the evolution of the sign in its similarity with the evolutionary interpretation of labor. A «free» worker can produce only equivalences and a «free and emancipated sign» can only refer to equivalent values. That is why the philosopher determines the significance of the new European sign in the simulacrum of «nature» (the simulacrum of «nature» is regarded as the Idea of Nature). The problems of natural science and the metaphysics of reality are characteristic features of the entire bourgeoisie since the Renaissance.The principal role in the formation of Baudrillard’s conceptual representations belongs to language. The postmodern overcoming of the subject-object difference is realized by Baudrillard by appealing primarily to the linguistic or «sign» nature of reality. The object is transformed into an object-sign and as such, within the framework of the general theory of sign systems, becomes an encoded fragment whose main characteristic is not simply the stereotyped craving for «difference philosophy» but the subordination of the object system code to its totality. Objects appears from human life, and the life disappears as a subject, turning into a human-object, which like a thing, performing a certain function, appears in inter-human relations. Signed consumption covers the whole life of people, from consumption of things and ending with consumption of the environment of human life, which includes labor, leisure, culture, social sphere, nature. All this enters into human life in the form of consumed signs, «simulacrum», transforming it as a whole into a simulation, in the manipulation of signs. The sign, the «simulacrum,» indirectly helps a person to master reality, but at the same time he destroys the real, replaces it with himself. Therefore, it is impossible to distinguish reality from error, since a significant feature of our culture is that illusion, imitation or simulation is so deeply preserved in our lives that it makes impossible the distinction between the real world and the realm of the imagination. The position of the researcher that in the era of postmodernity the distinctions between true and false, authentic and unauthentic, real and unreal are disappearing, is one of the central in his works and indicates a possible vector of cultural development. 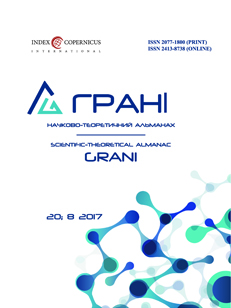