The critical state of society can be measured by a system of interrelated indicators - economic, technologi­cal, political, cultural, ethnic and demographic. However, it is no exaggeration to state that they originally focused on the social aspects of life people lead to an integrated life crisis at a time of social transformations. There is no universal model of social dialogue; it is a means of improving productivity and competitiveness. Social dialogue - not only a form of crisis management, sometimes governments are turning to social part­ners only in case of economic crisis, seeking their support in taking unpopular measures. This approach is fundamentally wrong, because the dialogue is based on mutual trust and confidence, cooperation achieved over the years. That social dialogue should be used not only in adverse but also in favorable socio-economic circumstances. Opposition, competition, conflict, alternative, dissent is not only inevitable characteristics of a complex human world, but necessary factors that discourage stagnation, stagnation of society, the condi­tions of its constant renewal and development. Clarification of the nature and essence of social conflict as a specific manifestation of the contradictions of social relations requires consideration of a number of interre­© І.З. Держко, 2015 lated factors. First of all, we should take into account the fact that modern society is the very course of change in scientific thinking, social structure, is drawn into a new state, which is accompanied by adapting social transformation. That is why these problems require analysis of the conditions of its emergence, development methods and tools for forecasting and warning deviation from social norms. Social process includes ways of interaction between state and society, institutions and groups, political system and social environment, government and citizens. Social dialogue is one way of interaction between state and society; its interests are represented, including trade unions and organizations. Under the social dialogue process should be under­stood that includes all types of negotiation, consultation and exchange of information aimed at the successful solution of social and economic policy. The whole history of the formation of social, political, ethical thought is an attempt to find optimal development of society, get rid of unpleasant disorders that often the danger to life and well-being, deviations from accepted values and standards. All social human history represents a continuous process of self-education and self-organization of the individual and society, the development and changes of various types and forms of regulation relationships, their ordering, discipline and regulation. Society through social factors governing rules create institutions of social control over the behavior of people in order to guarantee public order and tranquility; They include a huge number of methods and means of in­fluence, habits, moral principles, traditions, customs, common rules, regulations, standards and enforcement points. Synthesis same concept is the social norm, as an important means of targeting individual or social group in a rather complex personal, group, social ties and relations in the period of social transformation. 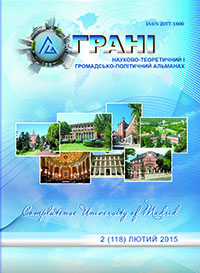