The paper is submitted to a scientific discussion the possibility of considering the idea of political science, based on the criteria of intellectual integrity and disciplinary unity. In this context, generally accepted among professionals and political scientists idea that political science as a scientific discipline occurs in the early twentieth century and its conceptual framework is still in a state of development, and a long preceding period should be characterized as a period of political thought is being challenged. The main idea that is being proved is recognition the existence of such scientific discipline as political science requires recognition of the existence of specific inherent ideals of science, cognitive standards, rules, procedures, explanations, etc. They allow political thinkers from the ancient world as well as modern researchers to combine it into a single, unique, different from others in their methodological principles and heuristic potential Science. It is convinced that the existence of intellectual integrity and disciplinary unity in Political Science is possible due to the existence of the ideals of scholarship, which are closely related to the cultural and historical context in which Political Science is being developed. The possibility of applying such disciplinary and integrated approach is considered as an example of the impact that was made by changes of the Great French Revolution and its consequences on transformation of the conceptual framework of Political Science.  It is concluded that the consideration of the peculiarities of political thought development in the social and cultural contexts related to the events of the Great French Revolution and its consequences argues that political science is responsive to changing the social context, makes changes in categorical apparatus, introduces the new field of scientific inquiry, actualized subject field. These actions are due to the specific disciplinary unity and intellectual integrity of Political Science and thanks to its variable component such as disciplinary matrix. 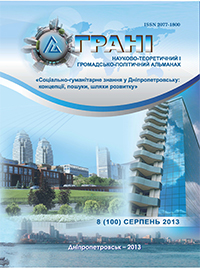