In the article the spiritual practices of Taoism. Established that the spiritual path in Taoism is the main ultimate goal - achieving eternal, indestructible personality transformation through meditation and the reduction of lower mental strength to their upper classes. To achieve this, the Taoist practices, special practices that include, along with the meditative contemplation technique classes and various gymnastics, breathing exercises and the like, and (for a significant period of its history) - Laboratory (“foreign”) alchemy. Among the spiritual practices of Taoism is the main meditation that has little to do with certain external techniques. Taoist meditation leads people to unity, the only person that connects with the cosmos and society. The author concluded that the path of self-improvement Taoist, under the guidance of a teacher, is a series of distinct stages, gaining purely individual instruction. Spiritual practices like Taoist, were widely known in other religious and philosophical systems. However, the semantics of Taoist practices are significantly different, as well as their function in the structure of religious practices in general. 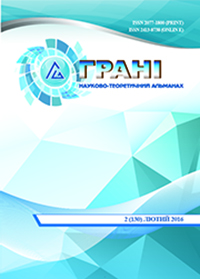 Published
2016-01-28
How to Cite
Butko, Y. (2016). Spiritual practices of taoism. Grani, 19(2), 151-154. https://doi.org/10.15421/1716038
Download Citation
Issue
Vol 19 No 2 (2016)
Section
PHILOSOPHY
Authors retain copyright and grant the journal right of first publication with the work simultaneously licensed under a Creative Commons Attribution License that allows others to share the work with an acknowledgement of the work's authorship and initial publication in this journal.