Between modern and postmodern: problem of the «political identity» concept in the scientific discourse of the 20th century

The sociopolitical and intellectual preconditions of the «political identity» concept’s categorical construction in the 20th century, as well as its historic and political origins have been defined in the article. It has been proved by the author that the «political identity» concept had replaced certain concepts, traditional for the Western classic philosophy discourse, such as «oneness», «selfness» and «self-awareness». Moreover, it was actualized by the cultural and sociopolitical context of late Modern and by the situation of transition from traditional society towards the post-traditional one, which was characterized by the increasing complexity of the social structure and expansion of political participation’s possibilities for citizens and groups. More relevant reflection of the social and communication dimensions of identity were provided, grounded by the psychoanalytical and sociological traditions of its interpretations and were further developed by the representatives of the symbolic interactionism and social constructivism. The conceptualization of the political identity began in the first half of the 20th century within the electoral studies, during which it was equated with party, ideological and class identification. Its broader interpretation was developed within the theories of modernization, transitology, new social movements, social and political systems, which emphasized the institutional and behavioral dimensions of political identity, as well as its integrative functions. It has been established in the study that the division into individual and collective (social) identities facilitated the differentiation of the identity research in political and social sphere and its subject identification. As a result, the collective identities most fully integrated into the subject field of political science, as they were interpreted as a reflection of common expectations, goals being as a factor of collective action mobilization, which is inevitably linked with resources, institutions and separation of powers in the modern societies. The development of plural social structure and social practices during the late Modern and Postmodern era promoted the plurality of group identities and the emergence of identity politics, which became a mechanism of the struggle for representation and acknowledgment of groups and communities’ equality and uniqueness. On the other hand, these processes caused the need for formation or construction of common macro-political identity, which would be beyond the party, ideology, class and other differences and therefore it would become the basis of society’s integrity and political system stability. Its most common models during the researched period were national and civic identity. 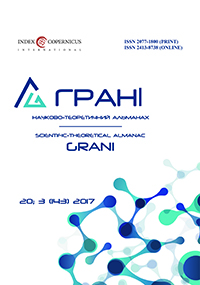 Published
2017-06-07
How to Cite
Uhryn, L. (2017). Between modern and postmodern: problem of the «political identity» concept in the scientific discourse of the 20th century. Grani, 20(3), 122-128. https://doi.org/10.15421/171752
Download Citation
Issue
Vol 20 No 3 (2017)
Section
Статті
Authors retain copyright and grant the journal right of first publication with the work simultaneously licensed under a Creative Commons Attribution License that allows others to share the work with an acknowledgement of the work's authorship and initial publication in this journal.