More and more often, local politics is becoming the research subject of contemporary experts in political science. Moreover, the local democracy becomes an important issue of researches in transition countries. Spread of the principles of direct democracy on the local level is the factor of democratic reforms stimulation, improvement of civic engagement, achievement of the transparency of government according to the highest European standards. The aim of the article is to set the characteristics of local communities consolidation based on foreign and domestic experience. The specificity of the interaction between local and central elites has been established.It has been argued, that in contemporary Ukraine the decentralization process caused the acquisition of local political parties and formation of their political subjectivity, which is based on equal relations with the central political elites. Activation of local political spectrum on local agenda determines the necessity of close cooperation between the existing political forces and nongovernmental organizations. It has been grounded that the implementation of projects for local area development requires joint solutions and takes into account the importance of main areas of community development. The consolidation process of the majority of Ukrainian local councils has rather dramatic history. It is especially visible from early days of the Ukrainian Independence Day (1991) to the recent local elections in 2015. The most optimal system of solution of inter-fractional conflicts and examples of the local communities’ cooperation has been determined in the article.It has been underlined that the local communities’ consolidation process in the contemporary world is the problem which has both empirical and theoretical importance. Depending on the size of the local area, local polices are taking different forms. As usual, they provide an agreement and compromise solutions based on issues that are important to the local community. The experience of the developed democracies has shown that local assemblies ensure the establishment of coalitions based on short-termed procedures. The study has tested that an important aspect of the formation of local communities consolidated position is based on development issues and civil participation. It is especially visible in the United States and the EU countries. The municipality level determines the quality of local political bodies, which is formed on party basis. For contemporary Ukraine important tools for provision of political responsibility are forces, which take care about the local communities and determine their development for a long period. Overall, the consolidation of political forces in the local government system is an important task that determines the need for the adoption of regulatory instruments which would ensure the harmonious and constructive political cooperation regardless of their ideological positions. 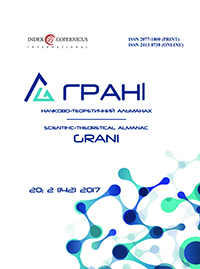 Published
2017-04-25
How to Cite
Fedorenko, V. (2017). Local communities’ consolidation process: political factors. Grani, 20(2), 20-25. https://doi.org/10.15421/171720
Download Citation
Issue
Vol 20 No 2 (2017)
Section
Статті
Authors retain copyright and grant the journal right of first publication with the work simultaneously licensed under a Creative Commons Attribution License that allows others to share the work with an acknowledgement of the work's authorship and initial publication in this journal.