Confucianism and gender culture of Japan

The problem of the definition of Confucianism areas of influence on the gender culture of Japanese society has been studied by the author. It has been found by the author that the influence of Confucianism on the gender culture of Japan supported the formation of a gender-servility’s women morality towards men and women enforcement to the behavioural roles, which are based on child-serving and house-wives scenarios. Confucianism has created the grounds for patriarchal sexism, by which woman is seen as an object of serving to masculine-centric hierarchies and must be formatted for the stereotypes of convenience in order to serve men under ordinary and extraordinary circumstances. The key points of the influence are as follows: legalized promiscuity allowance, porno-latrical behavioural model (especially in the aspect of women’s use as prostitutes), as well as the accentuation of gender roles in the biographies of etalon women which are described in Confucian treatises. It has been stated by the author that it is necessary to admit that the impact on the gender culture of Japan was made and is made not so much by Confucianism in its pure form, but by Shintoism Confucianism, which requires separate research in other publications. 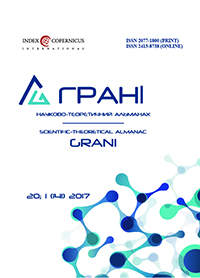 Published
2017-03-23
How to Cite
Svyatnenko, I. (2017). Confucianism and gender culture of Japan. Grani, 20(1), 32-36. https://doi.org/10.15421/17175
Download Citation
Issue
Vol 20 No 1 (2017)
Section
Статті
Authors retain copyright and grant the journal right of first publication with the work simultaneously licensed under a Creative Commons Attribution License that allows others to share the work with an acknowledgement of the work's authorship and initial publication in this journal.