Problems met by boarding schools have been described in the article from the point of view of modern sociological discourse. The system of boarding schools is understood as a sub-institution that performs the specific function of fulfilling the development and education of the younger generation in limited conditions. Such conditions are caused by health issues, dysfunctional families, and low economic status. The aim of boarding schools is to overcome or to mitigate the negative factors, which complicate the educational process and child’s life course of in general. An analysis of the subject area of sociology of education has been conducted by the researcher in connection with the specifics of socialization of boarding school pupils. The concept of surrogate kinship as a type of relationship of school teachers and pupils has been introduced by the author. The surrogate kinship suggests not only official, but also personal responsibility It is a sort of nonequivalent exchange when the teacher shares his time and efforts with the child, expects nothing back, extends their trustful relations beyond the school walls, strives not only for success in studies and perfect subordination but also for all-round development of a personality. Boarding school pupils perceive their teacher not only as a professional, but also as a person who acts another role. In this case teacher becomes to be one of parents. Primary and secondary socialization in boarding school blend as the role of parents in the primary socialization is played by teachers who, from a formal view, are the agents of secondary socialization.A characteristic of the dependency of graduates’ life paths from the personality model, which was fostered in the boarding school, has been given by the author. Such models are marginal, average, career or creative. It has been found that different types of boarding schools guide their graduates differently towards their future social roles. The schools for orphans and children with special needs are oriented towards the model of average personality, that is, a person who is able to survive and realize his/her needs of the middle level, but who is not ready to be in advance of the modern challenges. Boarding lyceums nurture successful and creative people who are up to the modern demands of the society, can act competitively in the labour market and who have high level of life resources for that. The importance of the consideration paid to sociocultural and natural factors in the analysis of the influence of the education process on boarding school graduates’ life path formation has been revealed by the author. 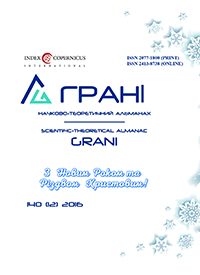 Published
2016-11-22
How to Cite
Gordienko, N. (2016). Problems of boarding educational institutions in the discourse of educational sociology. Grani, 19(12), 5-9. https://doi.org/10.15421/1716131
Download Citation
Issue
Vol 19 No 12 (2016)
Section
Статті
Authors retain copyright and grant the journal right of first publication with the work simultaneously licensed under a Creative Commons Attribution License that allows others to share the work with an acknowledgement of the work's authorship and initial publication in this journal.