An analysis of totalitarian consciousness in Frankfurt School socio-critical theory

In the article there were analyzed the main ideas of Frankfurt School representatives, namely Theodor. W. Adorno, Max Horkheimer, Herbert Marcuse, Erich Fromm. The author attempted to identify the main causes of neototalitarianism formation and the formation of totalitarian regime in the 20th century. In the attempt the author based on the main researches and fundamental works of Frankfurt school representatives. It was established an interdependency between the Enlightenment practice and the mythologizing of consciousness; the role of culture was determined. The role of ideological system as one of the forms of social mythology was described. It was established the regularity between ‘happy consciousness’ of the Consumer Society and myths and ideological system effecting rooting in the society mass consciousness of the 20th century. The relevance of the article is determined by the need for critical thinking of the development of totalitarian states culture that today is becoming obvious. An awareness of the fact that social consciousness of post-Soviet states still guided by myths that were created and instituted by totalitarian culture makes us serious study of the problems mythologizing of consciousness and ideological influence. Therefore the deliverance from prejudice and the transition to a new round of democratic society is not possible without studying the formations foundations of mass society and the functions of culture in it. Moreover, the solution of modernity global problems and the transition on qualitatively new round of social and cultural development is impossible without definition of conditions that identified the construction of Western civilization. 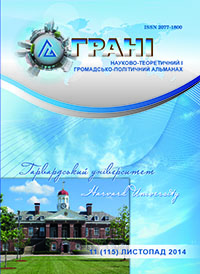