European economic area in the system of the EU foreign policy: norwegian perspective

European Economic Area was one of the first examples of developing the relations between the EU and other partner countries on the continent that rejected a full membership in this organization. This form of cooperation for over twenty years provides stability, predictability and constructive development of relations with the three European partners, including Norway. Currently, the EEA is seen as a model of deeper integration without getting a full-fledged membership in the EU. It should also be noted that this arrangement has proven its resistance to external shocks as reduction of members of EFTA, EU enlargement and adoption of new EU treaties. Therefore, Brussels supports the existence of the EEA and never officially put on the agenda of the termination of the agreement or revision of its provisions. For their part, most Norwegian political parties also defend the status quo. However, there are voices on the need to modernize the EEA, especially after the adoption of the Lisbon Treaty. It is also necessary to point out that the Norwegian model of cooperation with the EU has lost its original exceptionality, especially after the entry into force of the Association Agreement with Ukraine. Oslo has also to compete with a number of other countries, NGOs and other lobby groups for attention from the EU. Relations between Norway and the EU are characterized by the asymmetry of obligations under the EEA, as Oslo is obliged to unilaterally implement acquis communautaire, while having no effective leverage over decision-making in the EU. Another challenge is the weakness of the EFTA pillars in the EEA, as it is necessary to interact with an organization, which has 28 European member-countries. There are other negative aspects that gradually reduce the role of Norway in relations with the EU. Given the current challenges, different scenarios have been prepared focusing on for the further development of relations between the EU and Norway. According to one of them, Oslo has three basic options: maintaining the status quo within the EEA; explore another format of relations with the EU outside the EEA; get a full membership in the EU. However, the most productive approach would be to modernize the CEA, which would appropriately take into account current challenges. 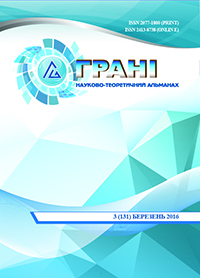 Published
2016-02-19
How to Cite
Barna, B. (2016). European economic area in the system of the EU foreign policy: norwegian perspective. Grani, 19(3), 73-77. https://doi.org/10.15421/1716063
Download Citation
Issue
Vol 19 No 3 (2016)
Section
POLITICAL SCIENCE
Authors retain copyright and grant the journal right of first publication with the work simultaneously licensed under a Creative Commons Attribution License that allows others to share the work with an acknowledgement of the work's authorship and initial publication in this journal.