The main features of the enlightened philosophy of history by A. R. Turgot

There were analyzed the main features of the concept of the enlightened  philosophy of history by A. R. Turgot, contained in his work «Discourse on World History».  Turgot identifies progress with the progress of science. Progress of mankind is a gradual evolution and the rise of human nature, expansion and purification of the senses, the spread of truth, virtue and prosperity among all classes and groups. He linked the progress with the fundamental principles of human abilities and the organization of society. All the elements of social life – science, art, morals, religion, in his view, are essential to historical progress, and thus appear as objects of philosophy of history. Characteristic of the philosophical and historical concepts by A. R. Turgot are three main points: the development of society in close connection with the forms of economic life, the transition from one activity to another with increasing activity and freedom, human progress is not done in a straight line – he goes zigzag through continuous struggle of truth with mistakes and errors.The most important historical achievement A. R. Turgot in the development of philosophy of history was that he related a story of mental activity of man with a history of his employment, economic activity and the development of forms of social organization. 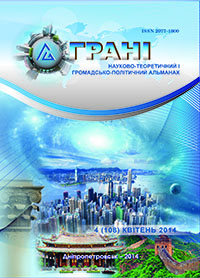 Published
2014-03-26
How to Cite
Hussein, H. (2014). The main features of the enlightened philosophy of history by A. R. Turgot. Grani, 17(4), 71-75. Retrieved from https://grani.org.ua/index.php/journal/article/view/481
Download Citation
Issue
Vol 17 No 4 (2014)
Section
PHILOSOPHY
Authors retain copyright and grant the journal right of first publication with the work simultaneously licensed under a Creative Commons Attribution License that allows others to share the work with an acknowledgement of the work's authorship and initial publication in this journal.