Government ideas of ukrainian orthodox clergy and political allians of the cossack hetmanate with the moscou in the second half of the XVII ct.

The article studies the common and distinctive features between the notions about the state of that part of the Ukrainian Orthodox intellectuals who supported the political alliance with Moscow in the second half of the XVII century, and similar notions of reformers in the Tsardom of Muscovy. On the basis of the analysis of state-building concepts by Baranovych L., I. Gisel, M. Fylymonovych and the Moscow Patriarch Nikon the attempt to identify the underlying causes of positive ideological attitude of the Ukrainian clergy to the association of The Cossack Hetmanate with the Tsardom of Muscovy and later with the Russian Empire was made. It is well-known that concepts of state by L. Baranovych gave the main political role to national officers and Cossack Hetman. The way to understand public associations is the  talent exchange between members of a society based on equality of all people and individual political subjectivity. The idea of the absolute power of the ruler was connected with the recognition of the need to legitimize the supreme power of the society, which was headed by the church. It is noted that L. Baranovych displays Russian historical continuity of Kievan Rus, justifying its conquest. It was found that the nature of public life by M. Fylymonovych fully understood in the context of the ideology of autocracy. The term «Russian people» in the metaphysical sense is recognized by him as the bearer of special historical mission and the keeper of the true faith. King was understood as the high priest, the church remained the spiritual realm only. The conclusion is that M. Fylymonovych attempted to integrate the Ukrainian state clergy idea into practice in the existing Tsardom of Muscovy. It is known that in the concept by Gisela I. ideal ruler is an autocrat who has the right to perform certain functions of the high priest. It is alleged that this concept is interpreted in the context of enlightened absolutism ideology of Moscow as the Third Rome, but the essential difference is to determine the role of the church in the state as a political leader. In the article the comparison of representations of Ukrainian state and the clergy of the Patriarch of Moscow Nikon were made. Determined that the main feature of this theory was to show the idea of the prevalence of patriarchal power over the king and the perception of them as fundamentally different by their nature. Visionary political patriarch goal was to transform Russia into a universal center of Orthodoxy and providing superior spiritual power over the secular. Comparison of these theories leads to the conclusion that the evolution of ideas Orthodox intellectuals of the country took place towards enlightened absolutism. The article states that in church circles existed in embryo reform projects and unity of the Tsardom of Muscovy and the Cossack Hetmanate according to the Ukrainian Orthodox intellectuals developed the theory of the ideal state. 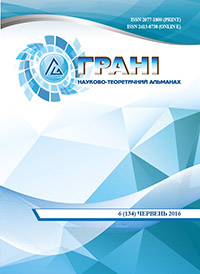 Published
2016-05-10
How to Cite
Shalashna, N. (2016). Government ideas of ukrainian orthodox clergy and political allians of the cossack hetmanate with the moscou in the second half of the XVII ct. Grani, 19(6), 48-57. https://doi.org/10.15421/171619
Download Citation
Issue
Vol 19 No 6 (2016)
Section
HISTORY
Authors retain copyright and grant the journal right of first publication with the work simultaneously licensed under a Creative Commons Attribution License that allows others to share the work with an acknowledgement of the work's authorship and initial publication in this journal.