The article deals with the relation of modernization and counter components of modernization in Islam. The author stated that the feature of Islam was and still is the fusion of the spiritual and temporal power, ierokratii and political administration. In one of the Islamic countries did not have an organized church, which would be the institutional and separate from the state. In practice, this leads to the merging of the Muslim clergy of interest with the administrative policy of the government. «Misalliance» between them there rather improbable fiction than everyday social and practical. In the Muslim world and never had a church, which is on the level of korporatizovanosti priesthood have likened the Catholic and Orthodox churches, religious and defending the interests of the church clergy, that would be delimited by ordinary believers. Unlike Christianity, Islam was formed in the conditions of the primitive society, which was also characteristic of religious and political holism in the aspect of intertwining of political and religious leadership of the Emirate and Caliphate with the charismatic warlordism. These circumstances make it difficult to unilateral reception values of Western culture and creates the preconditions for the adaptation of the secular institutions of the economy, education, medicine, etc. a trinity of «religion-politics-society». 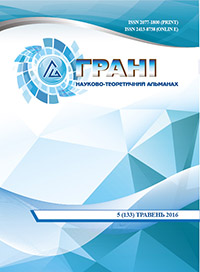 Published
2016-04-10
How to Cite
Medviedieva, Y. (2016). Correlation between modernization and counter-modernization components of islam: statement of the problem. Grani, 19(5), 82-87. https://doi.org/10.15421/171612
Download Citation
Issue
Vol 19 No 5 (2016)
Section
SOCIOLOGY
Authors retain copyright and grant the journal right of first publication with the work simultaneously licensed under a Creative Commons Attribution License that allows others to share the work with an acknowledgement of the work's authorship and initial publication in this journal.