In the context of restoration of government framework and local authorities in the regions prone to external aggression, special attention should be paid to the study of the problem of organisation of communication between public authorities and local population. It is the dialogue and the effective exchange of information between the population and the local authorities that constitute one of the major pillars of reintegration of Donbass territories, covered by the antiterrorist operation, into Ukraine; the regional specifics of the given territories is the anarchy resulting from withdrawal of the local government bodies that were legally elected yet in 2010. In fact, escape of heads and deputies of local councils in the most challenging period in life of the region catalysed the local people, reinforcing the sense of insecurity and understanding the betrayal of representatives of local government bodies. Thus, the issues of enhancement of communication channels effectiveness, which were still burning before the beginning of the external aggression and the partial occupation of Donbass, have been compounded today by the problem of establishment of communication channels between the population and the new Ukrainian local authorities nearly from scratch. This needs to take into account that the armed conflict conditions remain and, obviously, leave their imprint on social interaction within local communities. At the same time, it is the development of communication in the ATO zone, especially in the areas that underwent occupation or were released, which may form the basis for the harmonious entry of the citizens into the Ukrainian socium. Establishment of civil­military administrations (CMAs) with the purpose to temporarily substitute the non­functioning local authorities in Donbass is the unique experience for Ukraine. Despite legal recognition of rights and duties of local government bodies, it should be understood that CMAs act in terms of the «undeclared war», increasingly choosing the model of restricted interaction with the population in this context. The analysis conducted in the article shows that among the traditional information channels, CMAs give preference to reception of citizens by executive authorities and placement of announcements. At the same time, such forms as media, Internet resources, reports and assemblies of citizens are hardly used by CMAs which altogether results in discontent among the population. But the main thing is that in the ATO zone such important components of communication as information exchange and involvement of population in the decision making by local authorities are totally missing. This trend also defines the level of interconnection not only between the government and the population in the ATO zone; on the contrary, the studies, conducted by the All­Ukrainian Association of local government bodies of «Association of Ukrainian Cities» in cooperation with the Norwegian Institute for Urban and Regional Research, show that population in peaceful cities of Ukraine also experiences difficulties in communication with the government. This increases mistrust of the local government both in the ATO zone and in the country in the whole. The author of the article arrives at the conclusion about the need to reconsider the communication component in the work of local government bodies. It is in the ATO zone where the unique environment was established for creation of an open dialogue format, involvement of citizens into rebuilding the infrastructure thus nourishing the sense of participation in the governance. Given that CMAs report to state institutions, the situation can be reversed and the communication can be established only with the state support and intention. As the most efficient mechanism, the state may attract representatives of the third sector to this region, who could serve as volunteers for establishment of information services under CMAs, promptly reflecting and distributing information among the population and providing feedback. 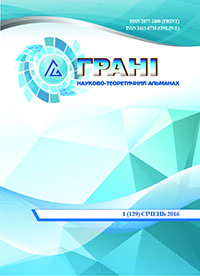