Geopolitical analysis as a way of understanding the world

The article describes the methodological foundations with the main stages of geopolitical analysis as a universal mechanism of penetration into complex systems and geopolitical processes of today. In this study, geopolitical analysis is understood as a political science research methodology applied international situations and processes aimed at policy­making in establishing, maintaining and improving control over the space. Attention is drawn to the fact that the geopolitical analysis focuses on ways to update and use the landscape and space to achieve political goals. Thus, with the help of geopolitical analysis a huge number of the natural features of the geographical environment communicatively activated only under special circumstances. The proposed approach focuses on how to uncover legitimizes the basis of actions and events in world politics, to establish their connection with certain interests. It is proved that the active implementation in practice of research geopolitical phenomena and processes of this kind of techniques / methods, and thus forced to develop methodological foundations of this work is one way to increase intensity of the geopolitical science. 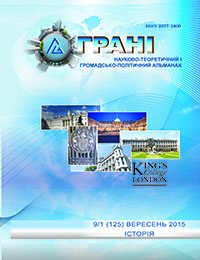 Published
2015-07-18
How to Cite
Osel’ska, O. (2015). Geopolitical analysis as a way of understanding the world. Grani, 18(9), 22-27. https://doi.org/10.15421/1715170
Download Citation
Issue
Vol 18 No 9 (2015)
Section
POLITICAL SCIENCE
Authors retain copyright and grant the journal right of first publication with the work simultaneously licensed under a Creative Commons Attribution License that allows others to share the work with an acknowledgement of the work's authorship and initial publication in this journal.