The world popularity and effectiveness of the American system of higher education encourages other countries to use its borrowed elements in the national education systems. The issues of integration within a single reform, within a single national education system cannot be solved because it is accompanied by the need to overcome a number of related conceptual problems. One of the major conceptual problems of national education is its commercialization. The example of education is where commercialization is the mechanism and the result of the reform American education. In American society there are two approaches to the issue of obtaining higher education. First, the so­called “Jeffersonville”, provides for equality of access to higher education, but subject to the production of high demands for qualities (abilities). Second, the so­called “Jacksonville”, also recognized the equality of access to higher education, but it is believed that the University should be free for everyone who has completed secondary education, regardless of ability. Despite the undeniable efficiency, impressive achievements in science, structural diversity and structure on democratic principles of the higher education system, the last few decades in American society does not cease its criticism, because universities and colleges are only indirectly fulfill the function of serving society. 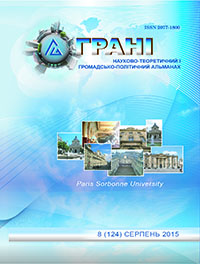 Published
2015-06-17
How to Cite
Khomeriki, O. (2015). Commercialization of education: world experience and ukrainian context. Grani, 18(8), 101-105. https://doi.org/10.15421/1715164
Download Citation
Issue
Vol 18 No 8 (2015)
Section
SOCIOLOGY
Authors retain copyright and grant the journal right of first publication with the work simultaneously licensed under a Creative Commons Attribution License that allows others to share the work with an acknowledgement of the work's authorship and initial publication in this journal.