Image of the state in social constructivism and structural functionalism

The article is devoted to the daily value­consciousness and cultural value measurements interpretation of the image of the state as a sociological concept in the theory of social constructivism and structural functionalism. In social constructivism image of the state is seen as a derivative mainly of social representations, which are interpreted as mental structures that can be a real sequel. We believe in that they are emerging concept of social scenarios, which the author says in konkretytsi social space and social marshrutuvannya card movement and interaction of people and social groups in society. This social idea and becomes what is not very different from reality, as there is in the minds of different social groups as reality. In structural functionalism state image viewed through the prism of symbolic codes as hidden or deep structure of the social system that has a four­layer structure and follows the four levels of the social order. These levels are chotyryma tsinisno­semantic centers (central zone), the focus of institutionalization, Historical, Cultural­Political and geopolitical concepts, social and cultural identity. These four components of the image corresponds to four levels of society social order, forming a hierarchy of images, including the image of the state as part of the political agenda occupies a subordinate position on religious and cosmological, cultural and social order. Each of these components correspond symbolic codes as tools in establishing the identity of its borders, helping to establish its cultural and physical boundaries, the formation of the registry needs kordonoutvorennya other societies (states) and the range of possible responses to pressure environment. Symbolic codes perform on the formation of social representations of the state and therefore the image of the state, programmable function because the logic of structural functionalism Eisenstadt, four levels correspond to the order of four types of images that can be played funktsionuvaty and as social representations, including: religious, cultural, social and political. The idea of the state and the image of the state, therefore, can not act on something autonomous value­semantic, focal­institutional, geopolitical and ethno­political and social images and, last can also remain or blurry. 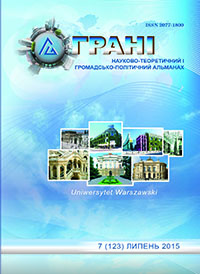 Published
2015-05-02
How to Cite
Pocelujko, A. (2015). Image of the state in social constructivism and structural functionalism. Grani, 18(7), 34-40. https://doi.org/10.15421/1715132
Download Citation
Issue
Vol 18 No 7 (2015)
Section
SOCIOLOGY
Authors retain copyright and grant the journal right of first publication with the work simultaneously licensed under a Creative Commons Attribution License that allows others to share the work with an acknowledgement of the work's authorship and initial publication in this journal.