In the article the features of mental revolution as a special form of mass change, group and individual consciousness. The author analyzes the relationship between the development of material and spiritual culture and the changes in the mentality of society. For explication of the mentality of the author of the dynamics used as a universal theory of Synergetics. The analysis showed that for thousands of years a revolutionary change of mentality is extremely rare and has been connected with global changes in culture, the achievements of scientific and technical progress. The dynamics of these changes in modern conditions has multiplied. Social consciousness is a reflection of the main spheres of life. Since the syncretism of these spheres of society can be represented as a dissipative structure that is sustainable only due to the inflow of entropy in one or more areas, the bifurcation of this structure is accompanied by a mental revolution. As the decisive acts fluctuations tend to the structural crisis. It may be the result of modernization, the impact of scientific and technological progress and other factors. The structural crisis triggers a systemic crisis, which leads to a mental revolution. Mental revolution is also linked to fundamental changes in the value system of individuals and groups, which are fixed at the level of different generations at the same time living in the community. 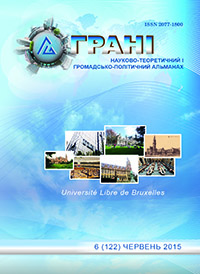 Published
2015-04-18
How to Cite
Bashkeyeva, E. (2015). «Mental revolution» in the context synergetic theory. Grani, 18(6), 23-27. https://doi.org/10.15421/1715113
Download Citation
Issue
Vol 18 No 6 (2015)
Section
PHILOSOPHY
Authors retain copyright and grant the journal right of first publication with the work simultaneously licensed under a Creative Commons Attribution License that allows others to share the work with an acknowledgement of the work's authorship and initial publication in this journal.