Geopolitical transformations and military calls in the modern globalized world

The geopolitical development in globalized modern systems is analyzed in the article. Global problems have planetary nature. They relate to the interests of all the nations of the world, they pose a threat of degradation and end of civilization, they require immediate decision making, collective efforts and cooperation of all the nations. A number of problems in relationships between societies are examined, and the real ways of their solving are suggested. Some of them are connected to the relationships inside the world community: prevention of the nuclear conflict, overcoming the backwardness of the developing countries; the others reflect the crisis in the relationships between the society and the nature (demographic crisis, food crisis, resource crisis, ecological crisis, energy crisis and others). Some of the most difficult global threats of the XXI century – local armed conflicts and hybrid wars on geopolitical and territorial grounds (eg. between Israel and Palestine, Ukraine and Russian Federation etc.) are considered in the article. These confrontations have become challenges for the whole world because they threaten with complete destabilization of the world order. Geopolitical development of modern societies has changed the priorities in the global problems. Some specialists consider energy and raw­materials problem as the priority, and the others – geopolitical division of territories and spheres of influence in the world. That is why, the problems of peace and disarmament, ecological, food, demographic, energy and raw­materials problems, overcoming of poverty and backwardness are among the most often mentioned global problems of the recent twenty years’ period. 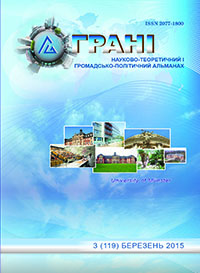