The article presents the results of an empirical sociological survey on the social capital of pupils of Ukrainian boarding schools. The questionnaires were distributed among the pupils of 14 Ukrainian boarding schools located in different regions of the country. In total, 634 pupils (those present in school at the time of survey) from grades 8-11took part in the survey. To analyze the empirical data, the total number of the respondents was divided into two groups: orphaned children and children with disabilities. These children require a particular social protection and they do need help in building up their social capital. The assessment of the key parameters has been carried out against the control group of healthy children and children of two-parent families. In the process of the research the key parameters of social capital of the respondents were identified. These are: values, confidence in surrounding persons (as the basis for social ties), pupils’ assessment of the importance of boarding school in their lives, academic performance, household incoming, readiness for the responsibilities of adult life after graduating from school and future plans. The empirical evidence show that system of values of orphaned children and children with disabilities includes, in one hand, the positions differing from those of rest of the pupils values (high value set on family, personal fulfillment, respect in the community, help to other people, having reliable friends, higher education, recreations and enjoyments) and, on the other hand, the values that are the same for each child (striving for high quality education, successful business, wealth, amusements, life spared from troubles, high social position).The research shows that the level of trust in the people in a community (family members, teachers, classmates of the same and opposite sex) among orphaned children is higher than among disabled children.Having analyzed the boarding school pupils’ assessment on the role of school in their life, the authors made a conclusion that responsibility and independence are the best values for orphaned children to possess and they need help when making the right decision regarding their life path. Disabled children need to develop good organizational skills, independence and self-discipline for adult living.The majority of children with disabilities do not want to leave a boarding school and continue their study in a regular inclusive school. The study covered the educational performance (the most important factor for future academic and career success) of the specified group and control group. The survey shows that the control group is performing better than the specified groups.Matching a measure of social capital with data on family income shows that social capital of children with disabilities is more comprehensive and 40,5% children with disabilities live in middle-class families.Basing on the empirical data, we conclude that children with disabilities and orphaned children, when compared with other children, feel doubts about their readiness for the responsibilities of adult life after graduating from school. 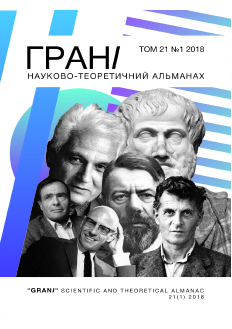 Published
2018-03-11
How to Cite
N., G. (2018). Social capital of pupils of Ukrainian boarding schools. Grani, 21(1), 46-55. https://doi.org/10.15421/17185
Download Citation
Issue
Vol 21 No 1 (2018)
Section
Статті
Authors retain copyright and grant the journal right of first publication with the work simultaneously licensed under a Creative Commons Attribution License that allows others to share the work with an acknowledgement of the work's authorship and initial publication in this journal.