A. Makarenko and Zygmund Freud: an attempt of a hermeneutic analysis of the virtual interaction of prominent European humanists

The national idea, as a search for a modern type of spiritual interpretation of the struggle for measuring its «own archetype» of Ukraine, is correlated with Anton Makarenko, with the preservation of historical optimism, in order to overcome the primitive view of the bearers of small-towns on democratization and patriotism. The post-classical metaphysics of the study of Ukrainian experience by the educators of the information age (V. Vernadsky, A. Makarenko,) reconstructs the spirit of the history of political thought − may embrace metaphysics, political science logistics of the nation or futurology, reviving the archetypes of the romantic and enlightenment procession. It should be the legacy of spiritual leaders reveal in terms of futurology, which determines the procedural logic educational space as «wonderful» context of the philosophy of history, which in this case is the best way of understanding «substantial» − transcendent depth of penetration Ukrainian reformer professional culture, Anton Makarenko, a representative of the spiritual elite in the nature and structure of training patriotic people, the intellectual depth of our dreams kozakofilsko-kordotsentrychnyy staff − the foundation of national existence, encompassing spirit the dynamics of life. The work of an outstanding teacher highlights the professional and socio-cultural component of his own philosophy of history, as well as the influence in the historical process of the image of Don Quixote of Zaporozhii on the knight execution of A. S. Makarenko of his particular role as the organizer of latent resistance to imperial invasion. In their barracks, socialism tried to overthrow humanism, and the denial of human freedom, shaded by revolutionary phraseology. The phenomenon of some vulgar manifestations of mass violence is supposedly a form of secular messianism. Although the spirit of the Kozakophilic necessity gradually forces the «little» person into an instrument not to be bureaucracy and despotism, but the productive forces and European humanities in favor of the European path of Ukraine. European laughter culture was examined by Z. Freud as a psychoanalyst proposed the character of «good knight» Don Quixote de la Mancha as a valiant knight isn`t a comic hero but humorous fun arises from an inhibition of some affective excitation… Originally Don Quixote de la Mancha purely comic figure, a big child infatugated by chivalric fantasy books… author (Migel de Cervantes) at the beginning didn`t want to say anything but after this the author awarded his person by profound wisdom and noble intentions and made it as a symbolic embodiment of idealism who believes strongly in the implementation of his goals… and literally keeps his promises and then this person ceases to produce a comic impression (Z. Freud Wit) [13 P. 246]. Carl Jung also continued Freudian cognition of humanism and the symbolism of good and evil in his key scientific works showing humanistic orientation of European archetypal nobility. «Reader hasn`t got any opportunity to get Archimedean fulcrum outside of his world relying on which he can «remove from loops» his time-limited consciousness and detect hidden characters in scientific and literary work» (Carl Jung). Passionarity of dialogue of Ukrainian patriots as a result of humiliation of the national spirit of freedom is displayed in Cartesian sense (Rene Descartes), the traditional of the variety of forms of Ukrainian resistance when increases the range of dissatisfaction of the level of assimilation and bureaucratization. As higher the level of alternative sociocultural activity, the higher protrudes civil ability to Ukrainian union of sets even of different as their fight after the sobornist of their own state objectively pushes for the dialogue since it is in communicative processes the culture of education of young patriots enriches with civil meaning partially attracts those or other axiomatic principles of their partners in philosophical comprehension of human being. 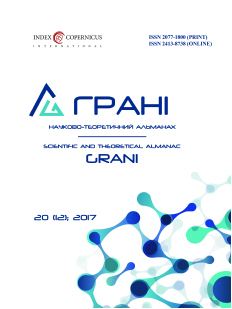 Published
2018-03-10
How to Cite
Aksonova, V. (2018). A. Makarenko and Zygmund Freud: an attempt of a hermeneutic analysis of the virtual interaction of prominent European humanists. Grani, 20(12), 18-23. https://doi.org/10.15421/1717159
Download Citation
Issue
Vol 20 No 12 (2017)
Section
Статті
Authors retain copyright and grant the journal right of first publication with the work simultaneously licensed under a Creative Commons Attribution License that allows others to share the work with an acknowledgement of the work's authorship and initial publication in this journal.