The civilization meaning of the potential of modern culture

The article explores the concept of A. Toynbee's civilizational changes, in the context of the problems of the study of modern culture. The difficult situation in the science of culture in our time makes researchers to proceed to such strategies that would have not only a strong empirical basis, but also deep philosophical grounds. The problem of the study of civilization is represented as a set of tasks with certain initial conditions and insufficiently realized final conditions for the representatives of the humanitarian sphere, the abstract scheme is transformed into the belief that we are meeting with the human response to the challenge of the natural environment. Reconstruction of the interaction of civilizations involves two points: the formation of a model describing the main existing for today's civilization; The study of the spectrum of possible relationships between them. The civilizational phase assumes deep analysis of the characteristics of the challenge, response, and linking process. The challenge is primarily formed by natural factors, as well as a special state of society. Natural factors are divided into two groups: depending only on the internal features of the natural environment, which can give rise to difficulties of varying degrees of complexity; emerging under the influence of the traditions of the former territory on the features of activity in the new territory. Analyzing the features of the mutual influence of culture, civilization and globalization, one can make important assumptions about the qualitative nature of the generalized response for each of the known local civilizations: for the civilization of Mesopotamia, the culture of irrigation farming; for the civilization of Egypt - the culture of basin farming; for the civilization of Greece - the culture of intellectual activity; for the civilization of Rome - the culture of infrastructural actions, etc. Using the potential of A. Toynbee's concept, in the context of studies of the era of globalization we can make an important conclusion about positive changes in the tools of cultural and historical thinking. The emerging framework of the methodology of cultural and historical thinking makes it possible to discover the organic inclusion of a cultural factor in the search for a solution to the problem of the future. In this case, we are not talking about culture as a special phenomenon of social being, but about its special transformational forms that are adequate to the historical stages of society. 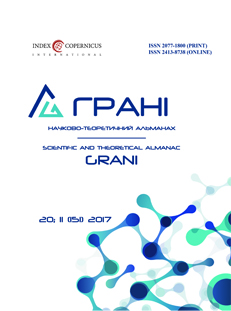 Published
2017-11-10
How to Cite
Forkosh, S. (2017). The civilization meaning of the potential of modern culture. Grani, 20(11), 117-121. https://doi.org/10.15421/1717155
Download Citation
Issue
Vol 20 No 11 (2017)
Section
Статті
Authors retain copyright and grant the journal right of first publication with the work simultaneously licensed under a Creative Commons Attribution License that allows others to share the work with an acknowledgement of the work's authorship and initial publication in this journal.