The author analyzes the genesis of the concept of «career ambitions» as the accumulation of resources for professional development of personal identity in order to implement its career scenario. The work details the features of the structure of the career and its derivatives. The paper devoted considerable attention to the process of implementation of career and the role of adaptation to the conditions in which there is a direct process of implementation career achievements of a particular person. The article analyzes such a feature of the dynamic realization of a career as its focus on certain individual values.It is indicated that despite the popularity of the concept of «career» in today’s social lexicon, social aspects of careers are not sufficiently studied, which prevents the rapid development sociology of career which has the potential to become an independent branch sociology and not to feel dependence on the sociology of labor and sociology of the economy. In the works of domestic scientists some were tested concepts and measurements sociology of career which generally does not provide a complete theory of career, within the framework of sociological discourse. In our opinion, the main indicators of career paths can be: social well-being, social comfort, wages, official posts, etc. In the future, should develop integrated parameter estimation career. It could include about 10-15 indicators and should be presented in the form of a coefficient.The author noted that the concept of «career» is complex and multidimensional, for today this notion in sociological discourse remains insufficiently investigated the publication analyzed the concept of «career» and its derivatives within the framework of sociological discourse and adjusted it taking into account modern sociological knowledge.The article gives examples of specific social markers, which determine the historical and social features of the use of the concept of career in the Ukrainian sociological discourse. Investigated ekserhichnosti features of the concept of career, which provides an opportunity to explore the concept of the content of the career relatively her social importance in the context of relevant social processes and practices. 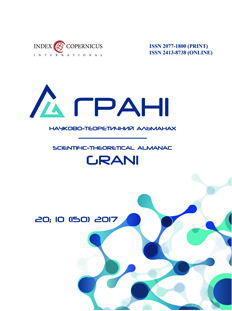 Published
2017-10-17
How to Cite
Kuzmin, V. (2017). Conceptually-categorical apparatus of career sociology. Grani, 20(10), 48-54. https://doi.org/10.15421/1717132
Download Citation
Issue
Vol 20 No 10 (2017)
Section
Статті
Authors retain copyright and grant the journal right of first publication with the work simultaneously licensed under a Creative Commons Attribution License that allows others to share the work with an acknowledgement of the work's authorship and initial publication in this journal.