Salafism is a notable phenomenon not only in the religious and political life of the Muslim countries, but also in those states that are far from Islam, because of the extremist activity of a number of radical organizations of the Salafism orientation. The clarification of the specifics of the worldview of salafists is an important issue, because it will help to understand the essence of their aspirations, as well as to promote the development of effective practices to prevent the destructive actions of radical Salafists. The purpose of this study is to identify and systematize the constructs that are the theoretical basis of Salafism. To achieve this goal, the study solved two research tasks. Firstly, the study analyzed the works of Islamic thinkers whose teachings had a significant influence on the formation of Salafism, and also revealed the specifics of the ideas offered by these thinkers. Secondly, the study highlighted the conceptual core of Salafism. The study shown that Salafism has not only own set of religious ideas and practices, but also its own theoretical and religious basis in the form of a specific religious-legal and religious-philosophical tradition of the interpretation of the Muslim doctrine. Moreover, study found that the following two stages are in the evolution of theoretical basis of Salafism: the religious-legal stage and religious-philosophical one. The first is represented, in particular, by the ideas of such thinkers as Ahmad ibn Hanbal and Muhammad ibn ʿAbd al-Wahhab. The second is represented, in particular, by such authors as Syed Abul A’la Maududi and Sayyid Qutb. The study argued that the specificity of Salafists’ interpretation of the concepts ‘tawhid’, ‘takfir’, ‘jihad’ constitutes the core of the originality of radical Salafism theoretical basis. Salafists interpret the idea of tawhid extremely rigorously and by projecting religious ideas to the political and legal spheres. The practice of takfir is interpreted by the Salafites very broadly, considering that the accusations in kufr can be directed not only to believers of all other religions, but also to Muslims who do not want to prove by their own actions that they are not kafirs. Among the interpretations of jihad, radical Salafists consider that it is possible to propagate and practice «jihad in the form of a sword» not only as a mean of protection, but also as an offensive mean. 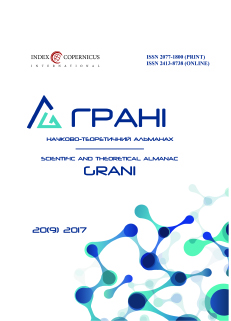 Published
2017-09-06
How to Cite
Nesprava, M. (2017). Theoretical foundations of radical salafism. Grani, 20(9), 5-11. https://doi.org/10.15421/1717115
Download Citation
Issue
Vol 20 No 9 (2017)
Section
Статті
Authors retain copyright and grant the journal right of first publication with the work simultaneously licensed under a Creative Commons Attribution License that allows others to share the work with an acknowledgement of the work's authorship and initial publication in this journal.